After a fun filled day in Sea World Jakarta
and Ocean Dream Samudra, we returned
to Mercure Hotel to dress up and have dinner
in a popular Restaurant  in Ancol that
offers authentic Indonesian cuisine. 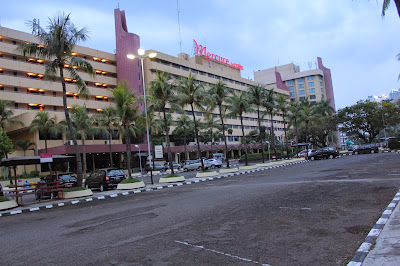 When we arrived at the hotel, we found out  that
they are having  a buffet  of Indonesian Cuisine
for that night at the Sunda Kelapa Restaurant-.
the hotel’s main restaurant at the ground floor. 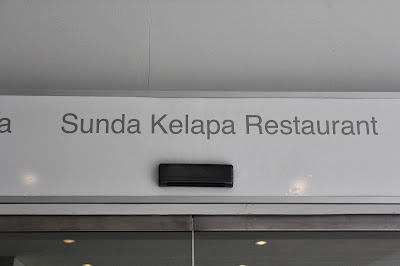 Since we were all tired and weary from
the all day walking at the theme park,
we decided to dine there instead. 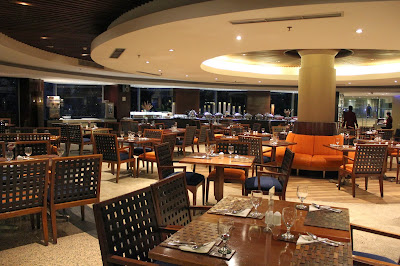 The buffet spread was impressive and the
waitress who speaks English well was kind
and patient enough to describe the different dishes
the  ingredients, the place where they originated
and sometimes their cultural significance. 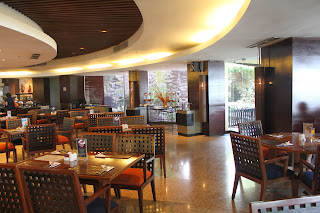 Most of the dishes on the buffet were spicy
so we ordered an a'la cart dinner of
Hianese Chicken for my very young son. 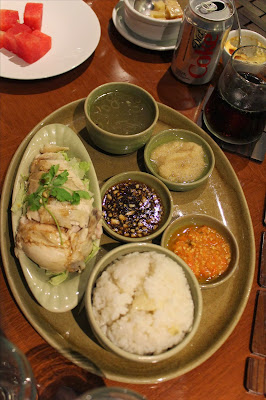 The rest of us wanted to try the
all Indonesian fare at the buffet.
It was rather difficult to decide which and
where to start as they have this massive
spread of dishes on several buffet tables- 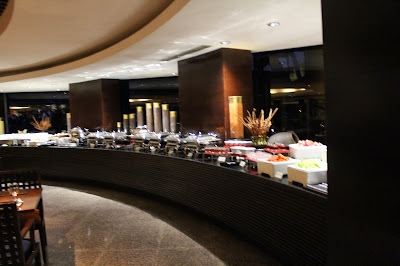 …so I began on the appetizer section  where they had several
entrees and I decided to try the Taho Petis Surabaya,
peanut based dish made of tofu and, veggies.
It was a little bit spicy but tasted was very good. 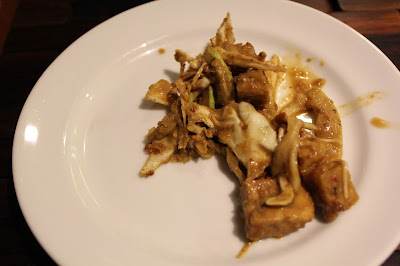 I followed it up with a type of Indonesian soup
called Soto Jakarta, which tasted like our own tinola
made creamy as it was cooked with coconut milk.. 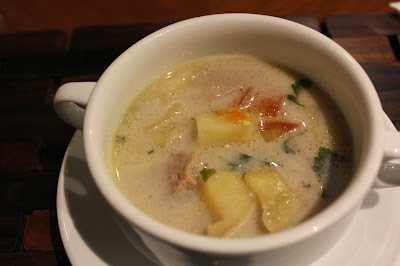 Another soup dish that I really enjoyed in the buffet was
the Soto Bandung, which was made of  pork broth,
small pieces of pork, tomatoes, peanuts and assorted
vegetables and soy sauce. It tasted like the Filipino Sinigang
without being sour and without the intolerable sting of tamarind. 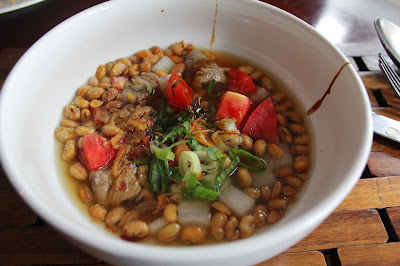 There were a lot of choices for the main course,
which included Tongseng Kambing,
which is made of lamb meat and  stir fried
with various fresh vegetables including
whole red hot peppers that sometimes one
could confuse for bits and pieces of carrots. 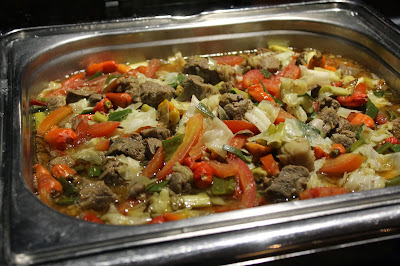 They also have Bundu Ayam, which is
a very delicious and sweetish chicken curry, 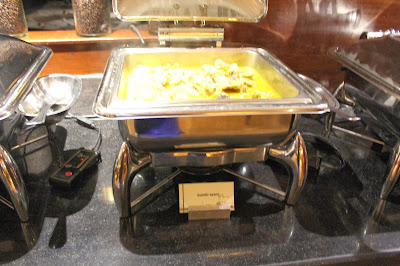 Tumis Kacang Paanjan Dengan Tampo
tasted very familiar as it was very much
like our ‘ginisang sitaw’ mixed with beef
hot red peppers and green on the dish-
and there’s a whole lot of them. 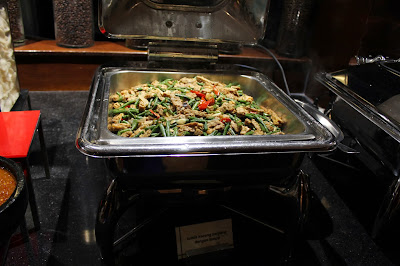 There was also Ikan Tumbu Prenjol,
which I cannot remember what it was
made of, but I believe it was curried beef
and it was so delicious that I recall having
made several servings of this dish. 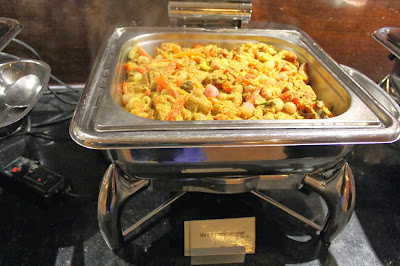 For dessert, they had Kolak Campur,
which was made of native yams, a root crop
cooked in sweetened coconut milk. 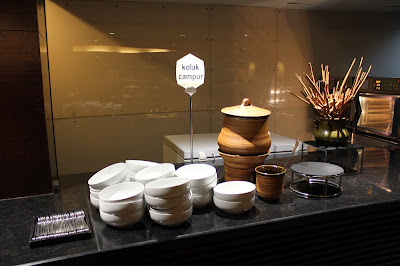 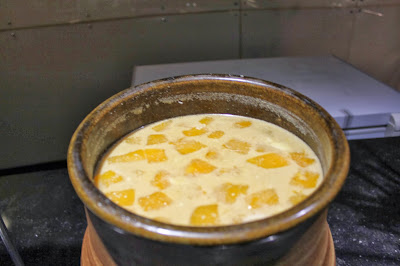 It wasn’t hard to love and enjoy Indonesian cuisine,
as they are so similar to most of the Filipino dishes, 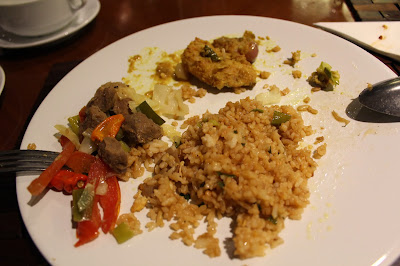 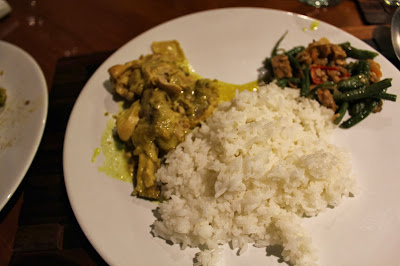 And for Bicolanos like my family, it was even easier
for us to adjust to Indonesian food because just like us
they also use lots of coconut milk and lots spicy capsicum. 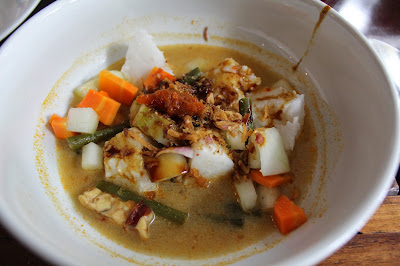 The only difference is that they use a lot of curry,
but that was okay-  we like curried food anyway. 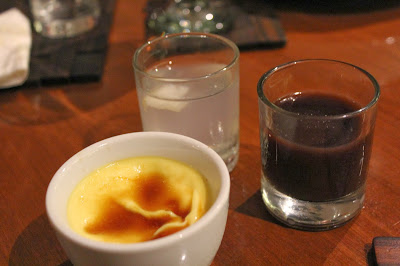 Interestingly- some of their dishes, looks
and sounds the same like Gulai Nangka. 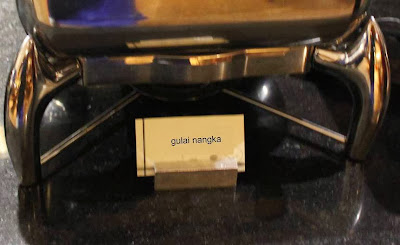 And to most Filipinos, we cook and call the dish
exactly the same as what Indonesian does-
‘Gulay na Langka’- well, I should actually say, almost.