We initially went to the Avenue Square to dine,
but found all the restaurants and the
alfresco dining areas crowded with diners. 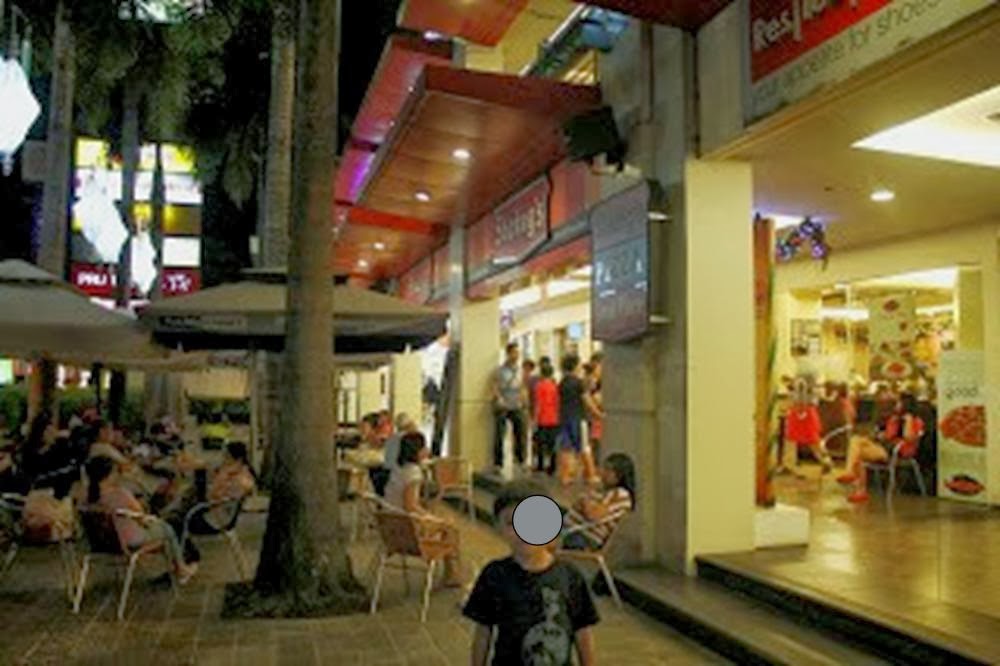 We decided to check the nearby Avenue Plaza Hotel
as we know it would offer us the peace and solitude
that we were looking for while dining. 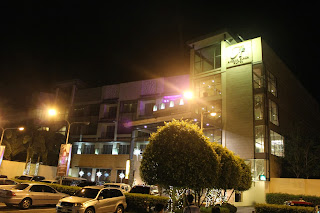 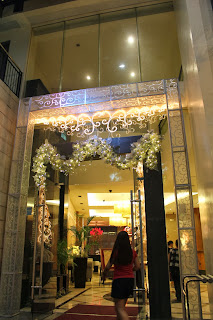 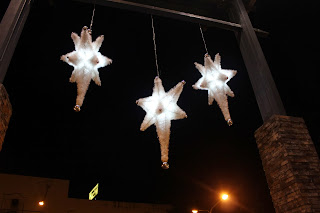 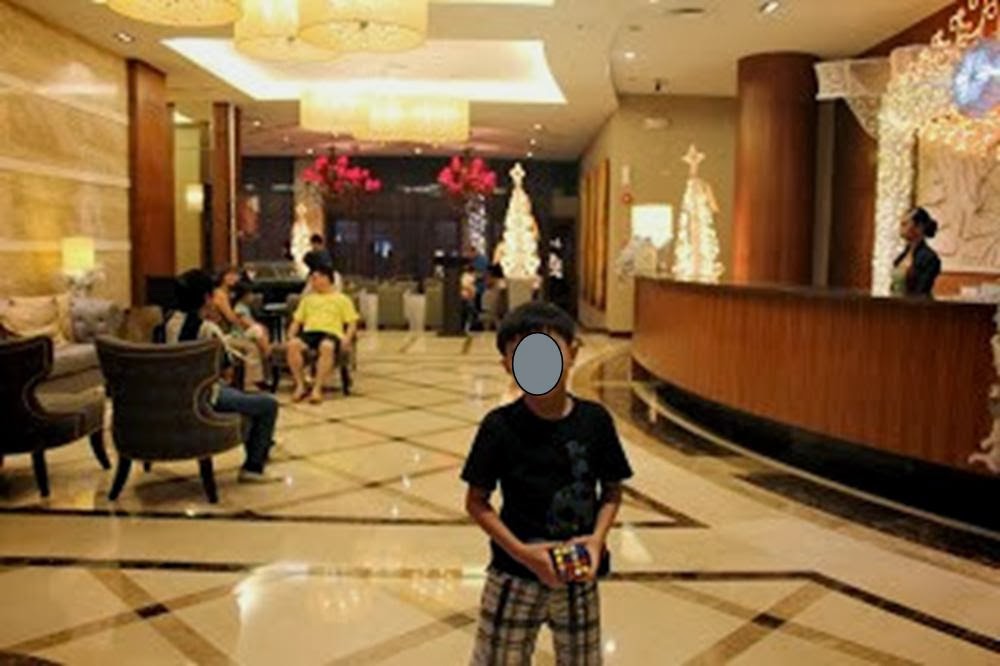 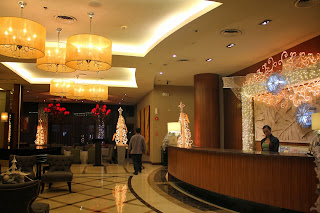 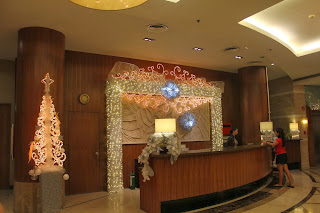 …for a a possible pre- New Year
dinner at the Café Plazuela. 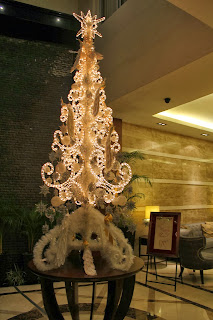 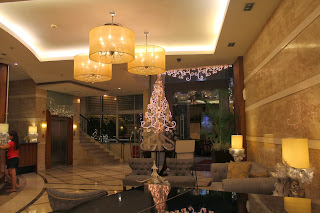 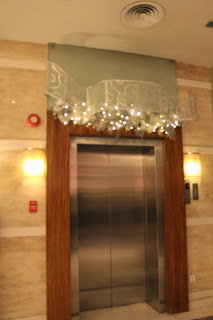 We were delighted to see very few people
at the restaurant, but we were told that all
tables were reserved in advance and that
they have no vacancy until midnight. 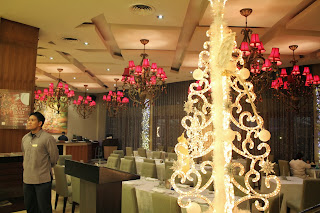 They politely suggested that we might want
to dine alfresco at the Umbria by the pool side, 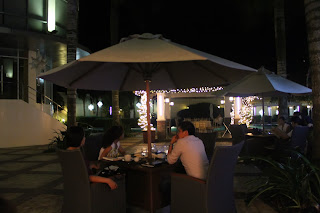 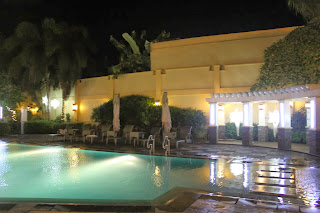 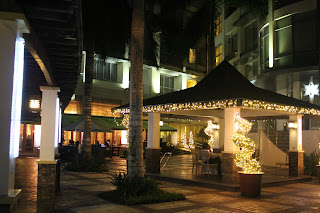 …since the weather was lovely, while the
December evening breeze was cold and
pleasantly chilly, we immediately agreed. 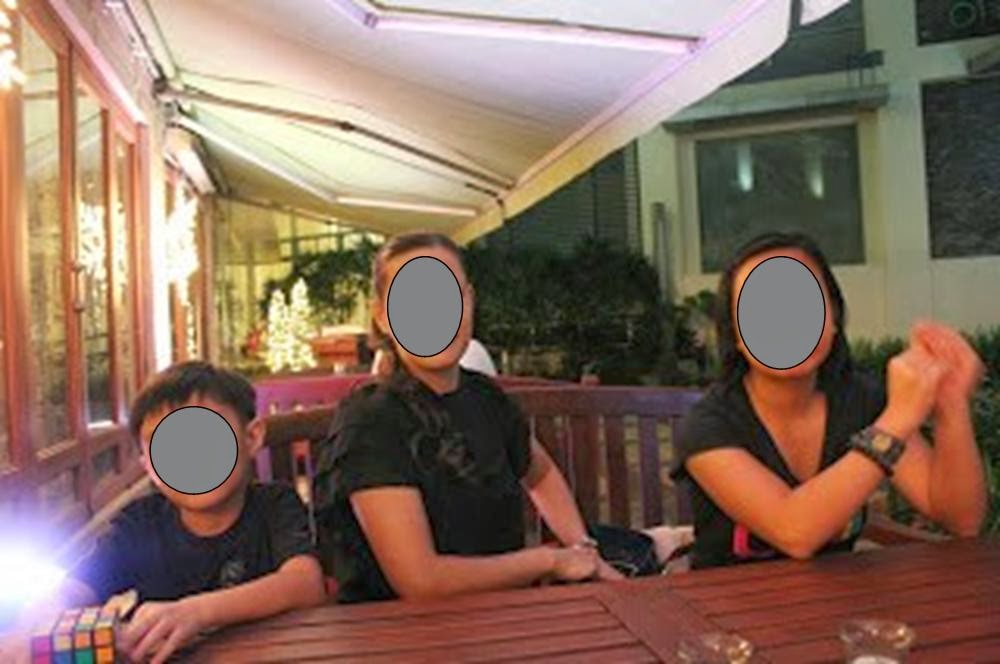 The Umbria is an outdoor poolside dining area
at the Avenue Plaza Hotel, where one can enjoy
the same dishes offered at the Café Plazuela menu. 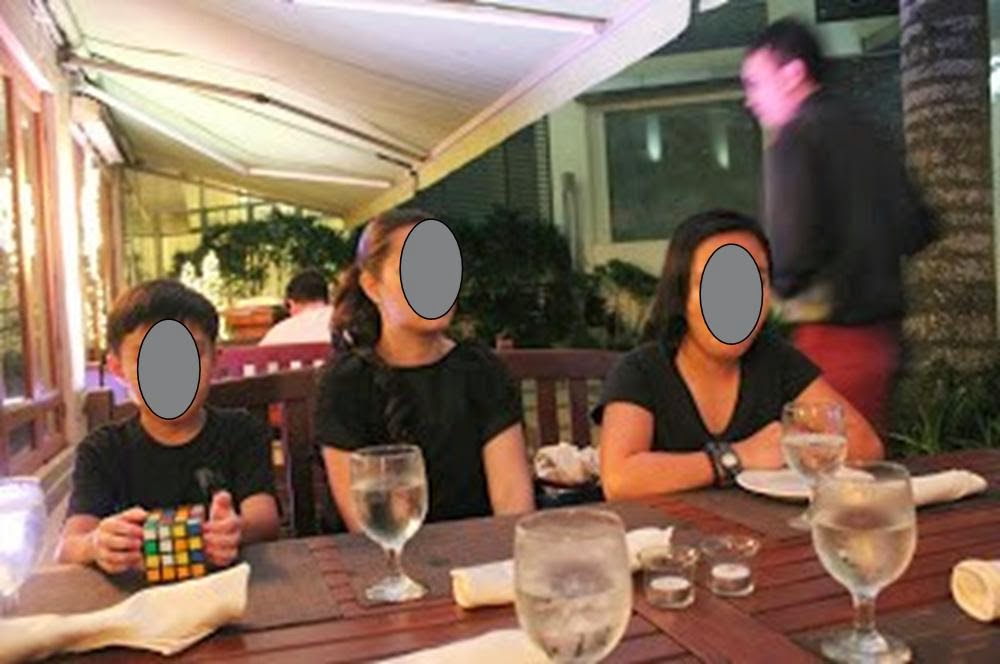 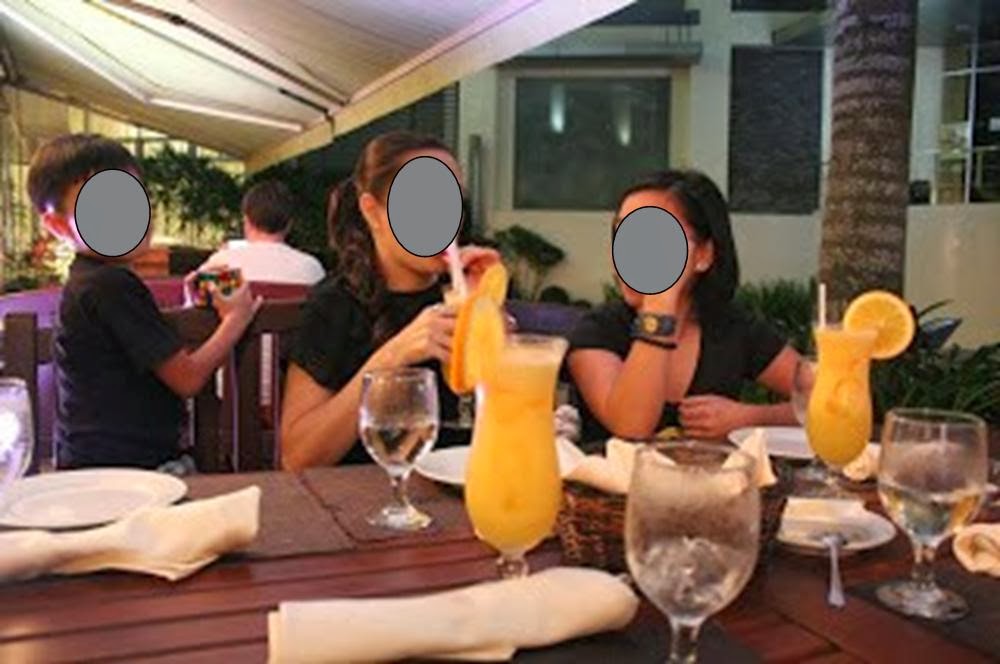 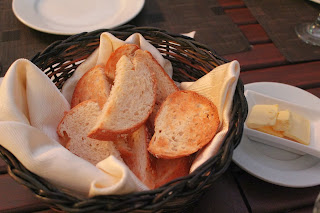 We started ur dinner with Seafood Minestrone Soup
which has fresh seafood  and poached vegetables
cooked in thick and creamy tomato sauce. 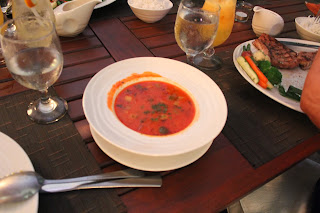 We also had Linguine Mushroom Pasta, a dish topped
with  creamy sauce of assorted mushroom, and one of
the best tasting pasta variation that we had so far. 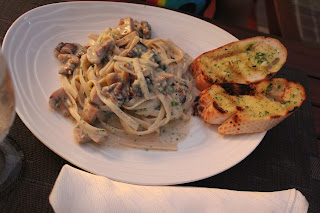 The main entrees were meant for one person but we
decided to share the as the servings were huge anyway.
We had a tasty and tender Australian Lamb Cutlets, 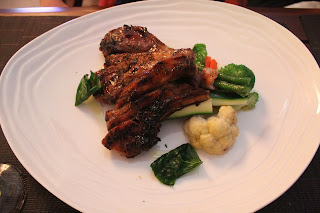 ...which was served and went well with sweetish
Mint Dip and was very, very delicious. 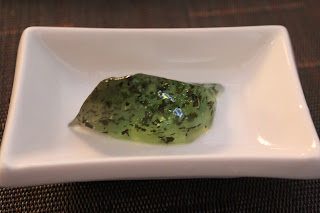 The Grilled Pink Salmon was very juicy as it was perfectly
cooked and served hot bathing on its flavorful herbs and
spices, with poached fresh assorted veggies on the side.
This is one of the best Avenue Plaza’s dishes that we
never fail to order whenever we are dining in the hotel. 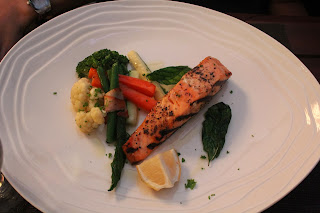 The Double Pork Chops came as two huge slabs
of well done and perfectly grilled pork chops with
fresh poached vegetables enough to feed my family.
We always  order this dish whenever we dine here
as the kids love Pork Chops and we never have to
persuade  them to eat  something they really like. 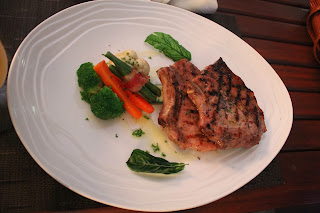 I had second thoughts when I ordered Pili Crusted Salmon,
as we have already ordered Grilled Salmon earlier, but
I really wanted to try this original Avenue Plaza Hotel recipe.
It is a unique fusion cuisine of an international  fare of
Pink Norwegian Salmon crusted with the iconic Bicolano Pili. 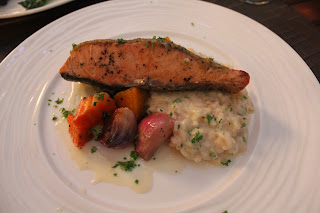 It tasted so divine. It was served lying in a delicious Risotto
with grilled onions and bite sized  poached squash on the side.
I would highly recommend Pili Crusted Salmon, as a
must try, from local Naguenos to tourists visiting Naga City. 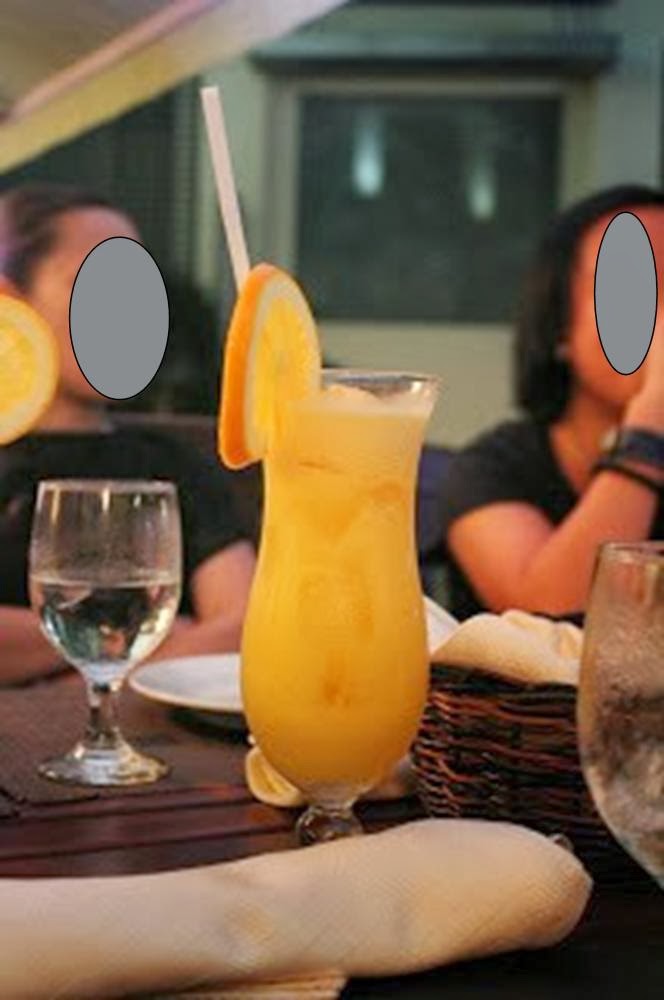 We had the New York Style Blueberry Cheesecake
dessert cancelled as we were so full and our tummies
could not take any additional food intake anymore. 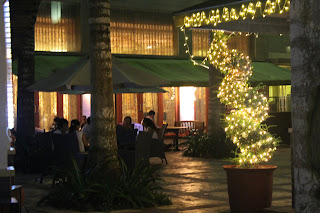 I would rate the quality of food and the service
of Avenue Plaza Hotel’s Umbria, a Triple A. 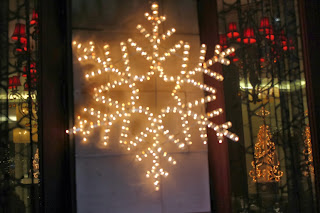 It has always been a pleasure for my family to dine here
as it is comparable to the best hotels in the world.

Click the links below for my other
Avenue Plaza Hotel Blogs

Posted by Ramon Caceres at 4:09 AM