I have only sparingly written about the restaurant
on ‘fused’ posts together with Yellow Cab
but never given Bigg's its own space
that it rightly deserves.
Click Here For Post: Yellow Cab and Bigg's Fused
Click Here for related post: Yellow Cab 3 PM Breakfast

Bigg's Diner is classified as fast- food chain
but  it doesn’t look like one.

...but looks can be deceiving.
Bigg's Diner is an all Bicolano restaurant
that had undergone series of identity crisis.

It started in the 80’s as a McDonald clone
with a Filipinized name of Mang Donald’s
that served Pinoy Goto side by side
with Western Burgers.

When McDonalds came to the Philippines
they changed their  name to Carl’s Diner.

When Carl’s Jr. arrived in the mid 90’s
it finally found its own identity as Biggs’ Diner .

It soared to new heights as Bigg's
and penetrated every major cities and towns
in Bicol and other parts in South Luzon.

Some may find it odd but my family only take
a single meal every Sunday between 2 to 4 PM.

It is a combination of breakfast, lunch, supper
and we had a chance have this very important
week end family meal in Bigg's Centro 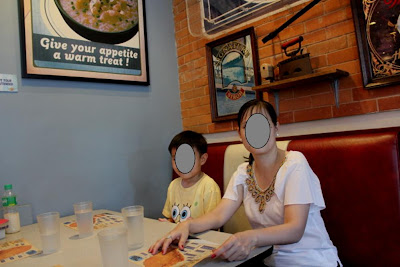 My wife and son were in the mood
for a real  breakfast fare so they ordered
Tocilog made up of Tocino, Fried Egg
and Garlic Rice

and Beef Tapa with Fried Egg
and Garlic Rice

We have never been a fan of most
of these Pinoy breakfast fares as
these dishes taste so disgustingly sweet
as if they were cooked like candied meat.
The Bigg’s Tapa  was less sweeter than
the carenderia  version  and still palatably acceptable
but we found the tocino too sweet so we set it aside
and ordered a replacement
of  Sausages with egg, which was okay.

I’m a burger fanatic and it is my comfort food.
I ordered their gigantic Reuben Burger.

Although Bigg's burgers are not on my favorite list-
but this big slab of meat was okay- still,
it’s not the type of burger that I would crave for.

My daughter ordered the Spicy Chicken Wings to munch
and this dish was the one that saved our day.
It was yummy it was so good and tasty
that I ended up  eating half of it.

And of course, how can I forget,
the very popular Rock and Roll Iced Tea
that would always keep you rocking
and rolling  for more.

I have to admit that we did not order their

tried and tested iconic offerings like
Bigg's Crispy Chicken, Korean Spare Ribs,
and Tenderloin Tips to name a few-
which I would have raved in this blog.

Posted by Ramon Caceres at 4:18 PM