Tired a weary after an uphill Station of the Cross
hike in  Kawa- Kawa Nature Park, we were looking
for a place to dine in an air- conditioned comfort. 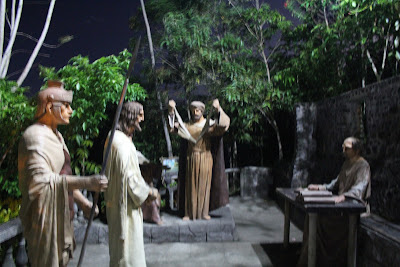 There were several new restaurants
at the base of the hill but none were air- conditioned
and all were crowded, hot and humid. 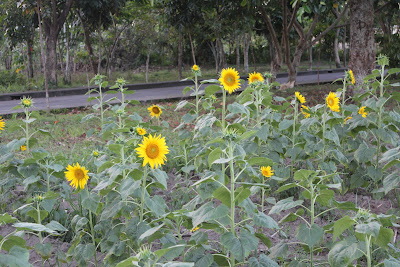 The Jollibee Restaurants in Ligao  and Polangui
were both closed,  so was Mang Inasal in Polangui.

The popular Bastian Restaurant in Polangui
was the next option but we were looking
for an air- conditioned place and that we found
in Macagang Diner in Nabua, CamSur. 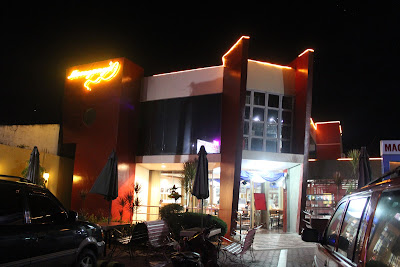 Macagang Diner is  attractive and  well maintained
and a part of a Department of Tourism accredited facilty
and rated as (Triple) AAA Hotel and Waterpark Complex. 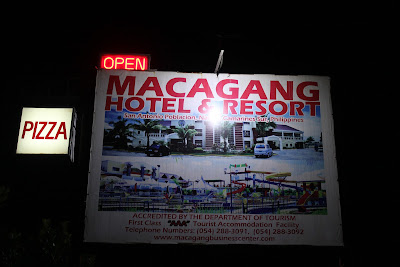 It offers and nice Al Fresco dining area which I believe
is a misnomer as it is located just beside a very busy
and dusty Nabua diversion road and a national highway. 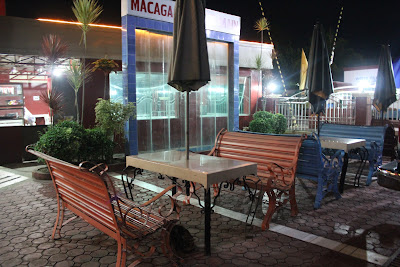 But there is really no reason to suffer the summer heat
and intolerable humidity  as it also offers a beautiful  indoor
air- conditioned and charming dining area. 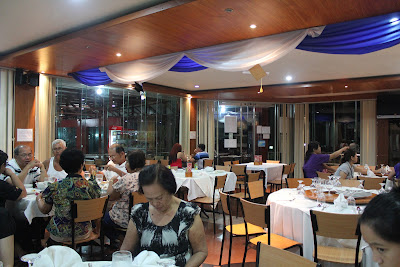 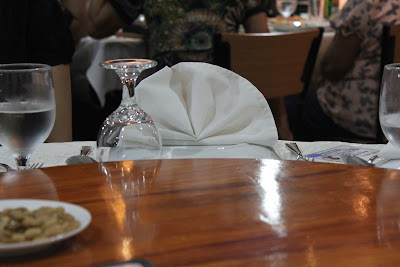 It had a very fast and  free
Wi Fi Connection. 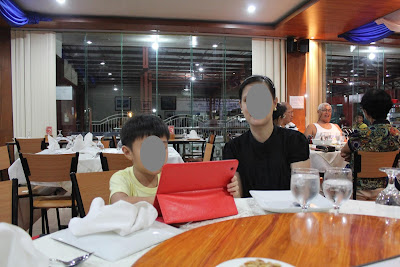 Since all of us were too hungry and exhausted
to choose what to order and what too eat
we decided to order the Chef’s  Rumble
apparently good for 10 persons for only Php 1,300. 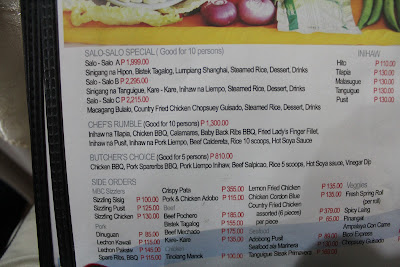 There were only six of us in the group so we were expecting
to feast (not fast) on a late Holy Thursday Night. 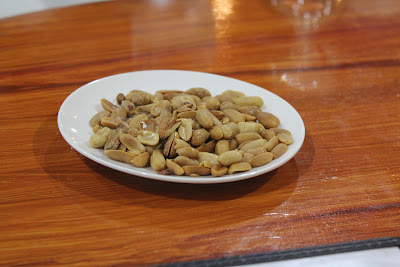 The Chef’s Rumble is made of Inihaw na Tilapia,
Chicken Barbecue, Calamares, Baby Back Ribs,
Fried Lady’s Finger Fillet, Inihaw na Pusit,
Inihaw na Pork Liempo, Beef Caldereta,  Pork Adobo
(not listed in the menu and but it was served nonetheless)
and was served in a medium sized bilao with
10 Cups of Rice (scoops according to the menu) 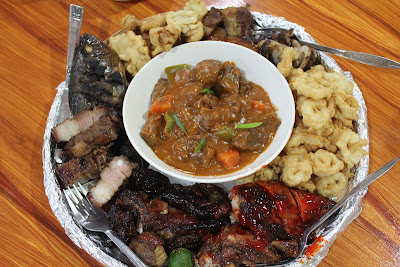 The sight of the food all laid out on a tray appears
like it was overflowing  and looked  overwhelming.
You would later come into a realization that while
it was supposed to be good for ten persons  but
the serving sizes of each dish unfortunately would
only be good for two to three persons
(except for the 10 cups of rice). 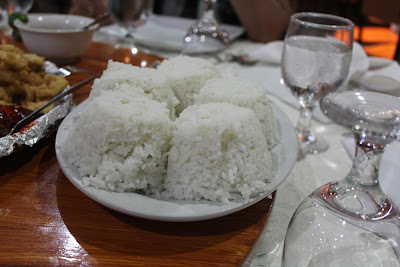 There was only one piece of Inihaw na Tilapia
and how would you expect someone to share
the fish to ten people unless Jesus Christ
comes in with a miraculous  rescue? 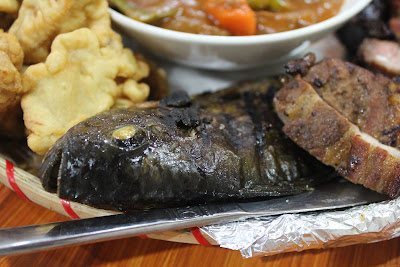 It had two pieces of
Chicken Barbecue, 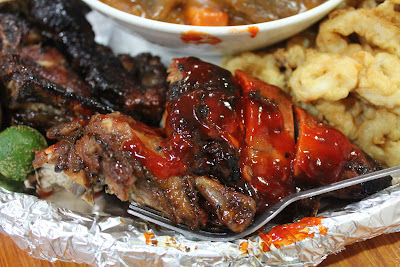 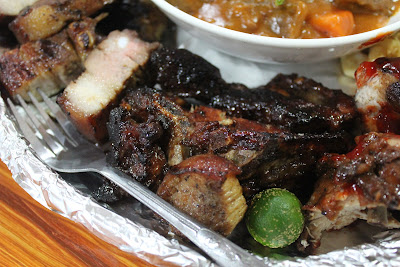 …one piece of
Inihaw na Pusit, 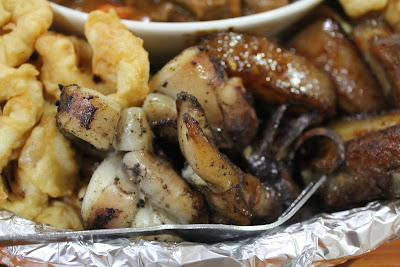 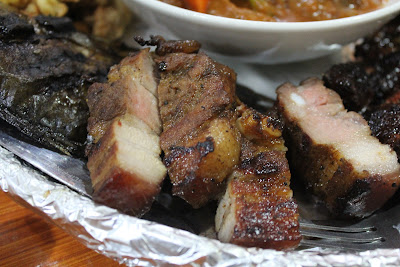 There were also about 3 chunks of
Pork Adobo on the tray.
This dish was not mentioned on the menu
but they must have forgotten to print it

all not enough to share even for the six of us
unless each one gets a tiny morsel of the food. 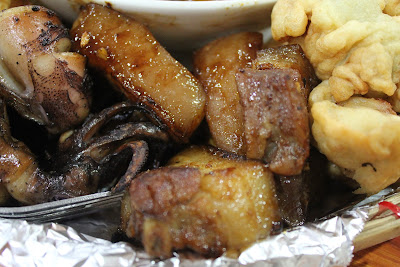 Good enough to be rationed for
6 persons are the Calamares, 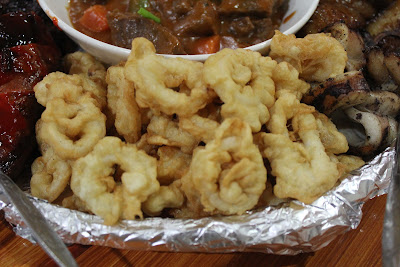 Fried Lady’s Finger Fillet which is made
of Fish Fillet coated with crusty crumbs.
served with tartar sauce 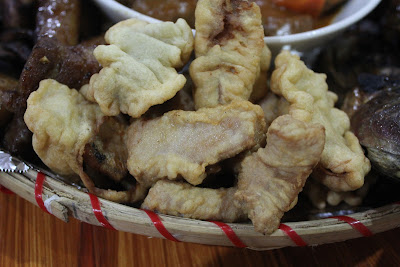 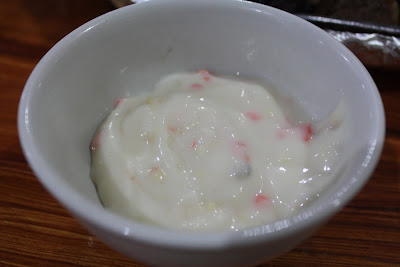 and the Caldereta served in a bowl. 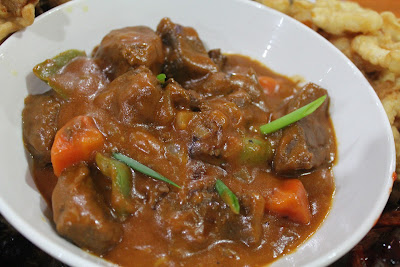 The good thing about the Chef’s Rumble
is that everything tasted so good and miraculously,
there was enough for every one and we even had
some leftovers to take home and that was understandable
as were only six of in our group (four adults and two kids). 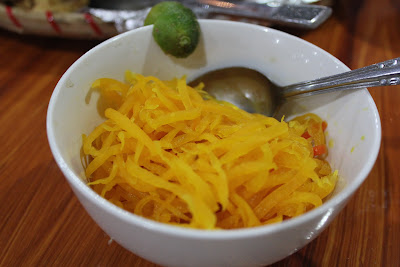 Things  would have been different if there were
ten hungry adults ready to rumble on one table. 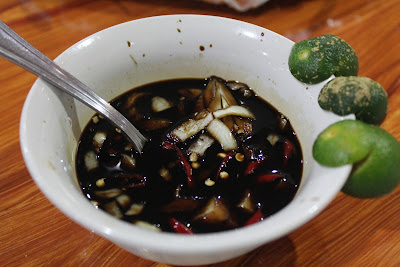 The Chef’s Rumble has a great selection of yummy dishes
but I think the restaurant should not over promote the dish
as good for 10 persons as the serving sizes are only good
for two to three persons to avoid disappointments. 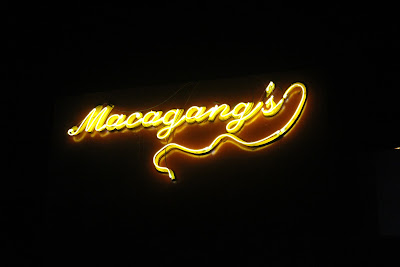 Watch out for my  Bicol Cuaresma Blogs

Posted by Ramon Caceres at 7:18 AM